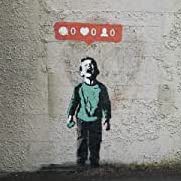 A good magician never reveals his magic tricks, they say, and if it was the same for the street art actors and their identity? In any case, it is the case for Banksy. If everyone knows his artist’s name, his identity remains hidden for the best and participates in the myth that haloed him. Many theories try to reveal his real name in the daylight, but nothing has been proven yet, and that’s good!
To go against this mystery and lift the veil as much as possible on this anonymity several curious people lead the investigation. Estimates allow to draw up a certain profile of the graffiti artist, making him born in 1974 and growing up in Great Britain, not far from Bristol. He started as a teenager in the underground scene of the region and made his debut in a group of graffiti artists called Bristol’s DryBreadz Crew (aka DBZ) before becoming a star of urban art.
It is in the 80s that he develops his style, a period conducive to the development of the alternative scene. Banksy is in the same vein as emerging street artists in France at that time, namely Blek le Rat, whose work is similar, but also Ernest-Pignon Ernest, Miss Tic or Jeff Aerosol. The stencil in the streets, of which Banksy has become the true ambassador, will initially impose itself to the British artist for practical reasons. He was often too slow during his first graffs and was often caught in the act. This technique offers him speed and efficiency, and will not leave him thereafter.
He makes his own patterns and sometimes accompanies them with slogans to underline his words. Committed and subversive artist, Banksy attacks societal injustices and seeks to denounce them. Anti-capitalism, anti-system, he defends his ideology with humor and when he talks about politics does not omit to insert some poetry. Two policemen kissing, a little girl losing her balloon, an activist getting ready to pull the pin out of a bunch of flowers, so many images that have been circulated many times for their symbolic and striking characters.

Banksy has fun staging this kind of characters in a recurrent way, policemen and children, but also soldiers, famous people or old people or even animals, especially monkeys and rats.
But how to remain anti-capitalist when you become a bankable artist? To answer this problem, Banksy wanted to challenge the art market in 2013 by selling his works in the middle of Central Park for ridiculous amounts of money, anonymously, of course. An operation that did not fail to make noise once revealed.
Banksy was not at his first trick. He has long made his art a real performance. During the 2004 Nothing Hill festival, the artist put a lot of fake 10 pound bills into circulation. Instead of seeing the face of Queen Elizabeth II, it is the face of Lady Diana who is affixed to this new currency, no longer the property of the “Bank of England” but that of “Banksy of England”.
He continues his rise and diversifies more and more, but with the same intentions. In 2010, he directed a docu-drama “Faites le Mur!” filmed by Thierry Guetta, which follows the daily life of artists Invader, Shepard Fairey, Mr Brainwash and Banksy and attacks the clichés that affect street art. Then in 2013, he invests New York City with his stencils and installations under the title “Better out than in”. At the crossroads between the track game and the ephemeral open-air gallery, he opens an artistic marathon by unveiling a work to be discovered in the city every day.
Finally, it is in 2015 that we could attend the greatest tour de force of the street artist. To go even further in his criticism of the consumerist society, he opened the doors of Dismaland! A life-size amusement park where everything seems nauseating. For the occasion, 57 artists met and carried out this project. One more action that participates in writing the history of bansky and inscribing him in the memories of street-art and well beyond, of art in general. Banksy also paid tribute to the victims of the November 13 attacks with several works in Paris. 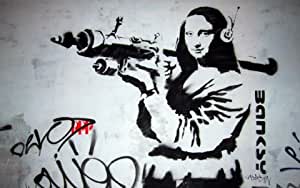 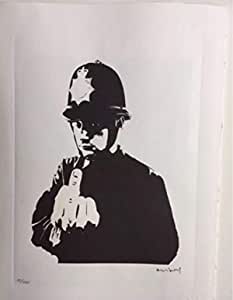 Opening of the gallery